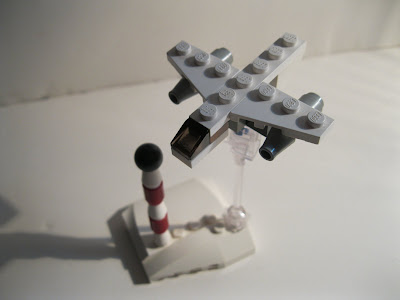 A plane passes over on of the most famous nonexistent landmarks of all time, the North Pole. Seriously, why doesn't someone just stick a red and white pole in the artic and be done with it? Or maybe someone already has, I don't know. Anyway, I am done with exams now!!!

-Buzz Droid
Posted by Buzz Droid at 7:54 PM No comments: 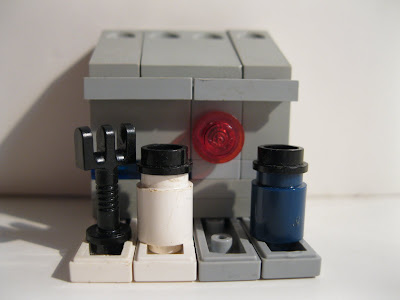 Even snowmen have to look both ways before crossing the street. Yes, this is a redux of a model from last year. I was running out of ideas for today. I figured that if Hollywood can remake old stuff when they're out of ideas, so can I!

-Buzz Droid
Posted by Buzz Droid at 7:29 PM No comments: 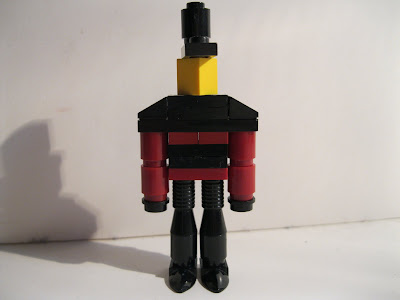 Sorry for the late post! I was taking pictures somewhere else yesterday and used up my camera's batteries! So here is a toy solider for all of you. It was originally supposed to be a nut-cracker but that didn't work out in the end.

-Buzz Droid
Posted by Buzz Droid at 7:22 PM No comments: 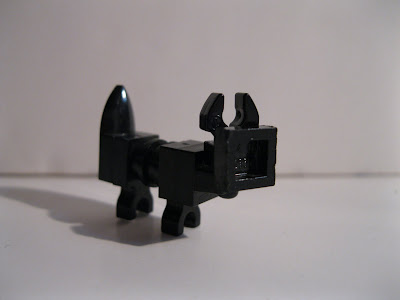 Or squirrel, or raccoon, or fox. Whatever... I don't really know

So this kicks off the first day of exam week mini models. I didn't really have much time to build today's model. It was supposed to be a reindeer but it looks like something else. Oh well! And the only reason it's robotic is because of the claws for antlers, and that blank face it has. I couldn't get a good face at the small of a scale...

-Buzz Droid
Posted by Buzz Droid at 8:09 PM No comments: 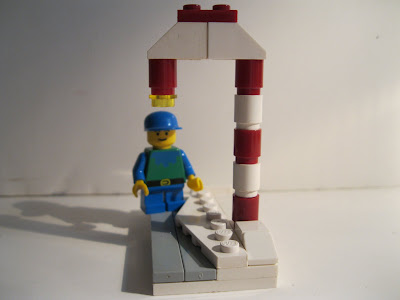 Just a quick little model to begin the week with. This week is exam week, so you know what that means... Wait, you don't? Well, it means a lot of mini models!!!
Posted by Buzz Droid at 7:21 PM No comments: 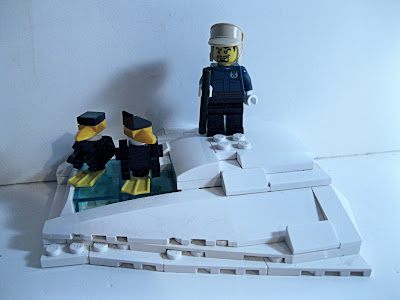 The Intrepid Explorer has come across some penguins. 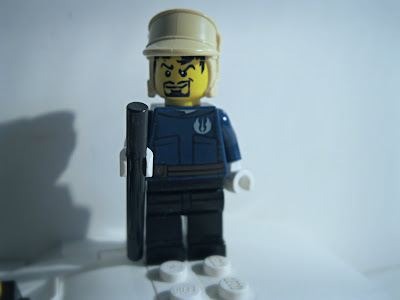 Penguins are delightful animals to watch. Even the most renowned explorer of all time pauses to marvel at these flightless birds! 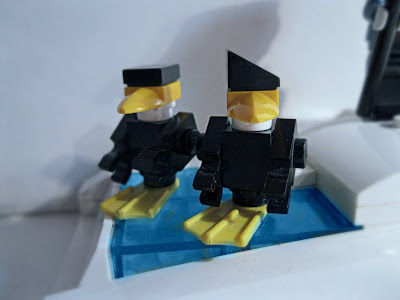 The one in the front thinks he's Will.I.Am... One certainly sees strange things when wandering around the North Pole!
-Buzz Droid
Posted by Buzz Droid at 6:34 PM No comments: 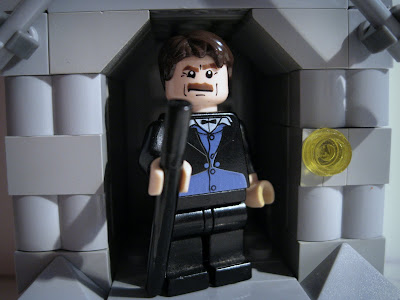 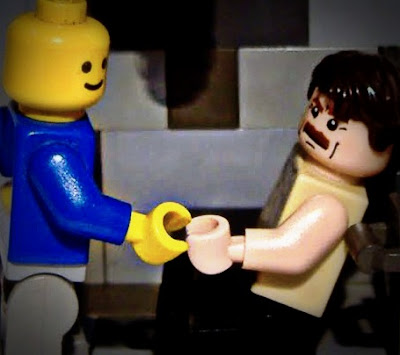 You might remember him from last year as "Homeless Joe". Well, a lot has changed since Minifig Max helped him out that Christmas season. 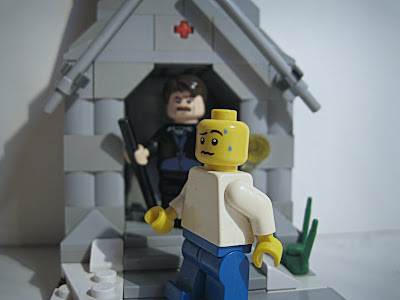 Joseph has gone a long way from being a hobo on the street. However, one thing hasn't seemed to change. People are still afraid to be anywhere near him! 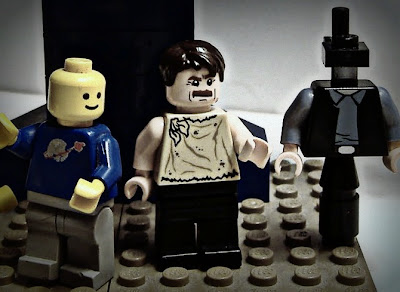 It all started when Joseph decided to start his own business. Remembering his love for good clothes, he was inspired to create his own clothing factory, which he called FineThreads©. 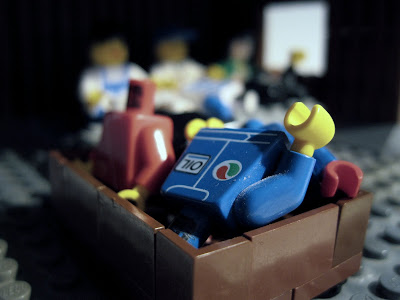 Business was great, and FineThreads© was very successful. However, Joseph dealt poorly with his sudden success. He became greedy, and eventually was only concerned with making more and more money. 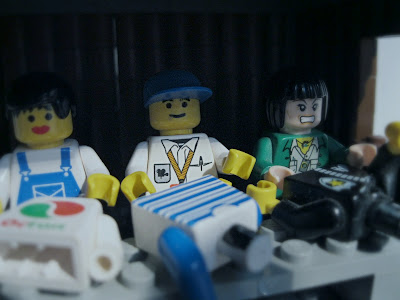 This is Tom Baggin. He is currently working at FineThreads© to earn a little extra cash for the holidays. 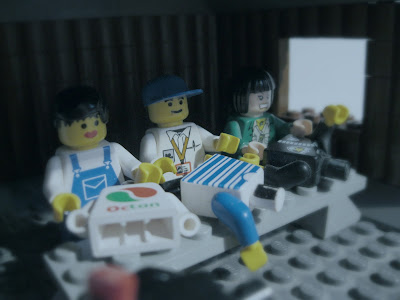 A few weeks before Black Friday, some of the machines in the factory broke down. While the company is ordering and installing replacements, several new people have been hired to do the machine's tasks manually. Tom and these other two people are assigned with the task of sewing the size tags on the back of each shirt.

Unfortunately, the mind-numbering task of sewing size tags in a dimly lit room isn't the worst part of this job... 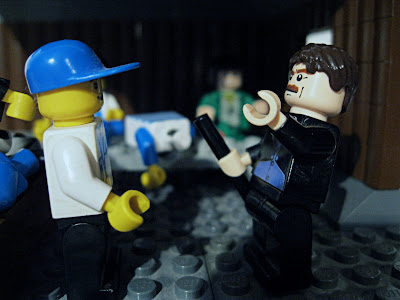 Tom: "Hey Mr.Groude, could I please have Christmas off this year? My nephew is traveling all the way from Canada to come visit, and I want to spend some time with him."

Mr. Groude: "Christmas off!?! Do you have any idea how far behind schedule that will put us!? I'm trying to run a business, and you want to take vacations! Soon you'll be asking for New Years off!" 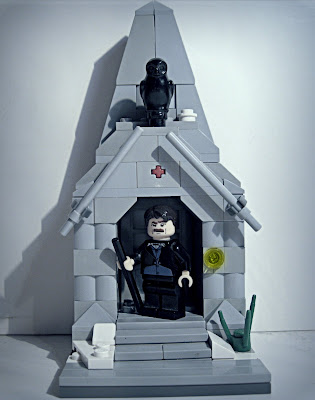 Joseph Edward Groude dosn't have many friends. As soon as he comes home from work, he goes and sits in his creepy mansion all night. 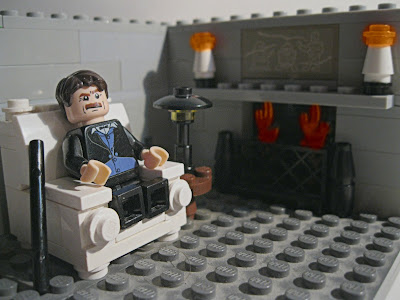 One night, while sitting in said mansion, he receives a phone call... 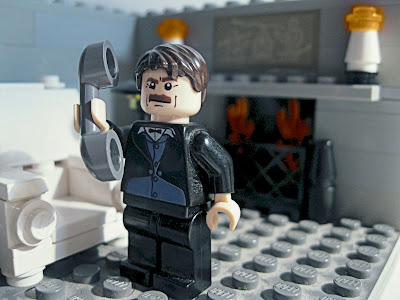 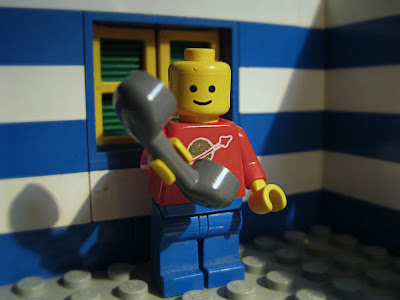 "It's your old friend Minifig Max! Remember me? Listen, I'm kinda concerned about you. You don't seem as happy as you used to be. I'm going to Colorado for Christmas this year, so instead of coming over myself, I'm gonna send three friends of mine to check up on you! I just wanted to let you know you would have visitors soon. I gotta catch my flight now, bye!" 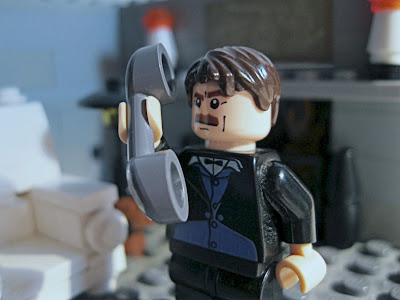 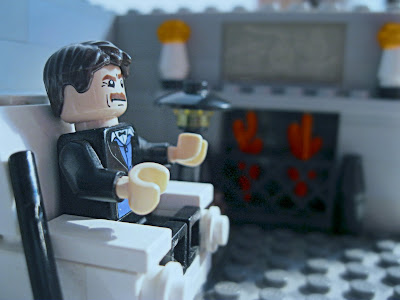 To be continued next week...
Hope you guys enjoyed the first part of our Christmas Tale. After all the corner-cutting I had to do last week it's nice to finally be able to make something I can be proud of. Anyway, I'll see you all tomorrow!
-Buzz Droid

Posted by Buzz Droid at 5:08 PM No comments:

Some Christmas Songs for your Listening Enjoyment!

Hey fellow Mocers! Buzz Droid here with my latest Lego project: The Advent Project. Basically how this works is from December 1st to December 25th I will post a small, Christmas-themed Lego model, kinda like the official Lego advent calendars. I will also be posting these models on my
Mocpages account, and three of these models will be entered into the BCN Advent Contest.

Buzz Droid
Buzz Droid is a TFOL who enjoys building pretty much any Lego model he has the parts for. He posts his creations on MocPages.com and can also be found on brickset.com, flickr.com, and fbtb.net.